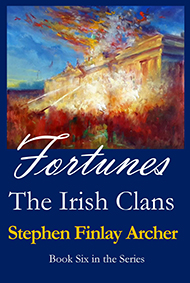 The mysteries of the O’Donnell Clan are explored in Fortunes, the sixth book in the series, set in the last year of the Irish Revolution’s War of Independence upheaval leading to the Anglo-Irish Treaty of 1921.