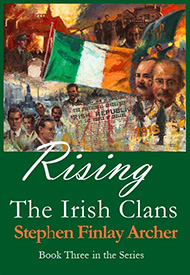 Irish Republican martyrs rise against overpowering British forces to spark the revolution in the 1916 Easter Rising, while the Clans search for unity and treasure to honor the Clans Pact of their ancestors in Rising, the third book in the series.