The Irish Brigade – Valor in Defending our Constitution

From Antietam to Charlottesville 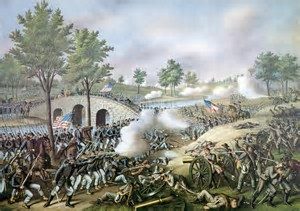 Antietam was a pivotal battle during our Civil War, waged one hundred and fifty five years ago on September 17, 1862 near Sharpsburg, Maryland. This was the bloodiest day in American history and the Union forces stopped General Lee’s march in union territory toward Washington DC. It occurred just after the Federalist defeat at Second Bull Run battle. It was the last act of the confederate invasion of the north. Who led the charge that won the day for the Federalist forces? 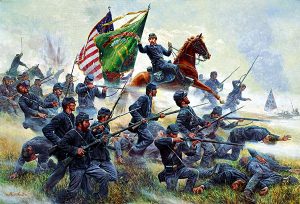 Painting by Mort Kunstler – Raise the Colors and Follow Me

That day the Irish Brigade of Union soldiers, commanded by Brig. General Thomas Francis Meagher, led the charge that stopped General Lee’s forces at great terrible loss of life to their ranks. This was an example of trench warfare fifty two years before the onset of the terrible war to end all wars in Europe. Only, in this case, the confederate soldiers were protected in a ditch and the Irish brigade was in the open, having to dismantle a fence to get to their adversary.

I mention this because most of these Irish patriots had recently emigrated from Ireland as a result of the Great Hunger, or potato famine, wherein the oppressive British overlords had withheld food such that a million Irish citizens had starved or died from resultant plague, while another million had escaped in coffin ships to America and elsewhere. They knew the devastating impact of man’s injustice and desperately wanted to help save the union according to the principles of the constitution in their new-found homeland.

This act of valor illuminates three facts, one that all of us except native Americans, are descended from immigrants, and most of our forefathers and mothers came here, unless they were captive slaves, because of our constitution that all men are created equal, with liberty and justice for all. And they were willing to fight for those principles to the death.

This was the supreme sacrifice of new citizens from Ireland, with high moral courage in their new country. Of the 200,000 of them who fought in the Civil War, out of the 1.5 million Irish Americans, all but ten percent were on the side of the Federalists.

It is painful to note that this watershed battle was fought less than a hundred and fifty miles away from Charlottesville Virginia, where we just witnessed that the battle for equality and justice is still ongoing. Racism and bigotry are far from dead. It is my view that our divisive government is not governing for the people despite what it professes, but only for the affluent and powerful, and some of our leaders are not adhering to the principles of our constitution. This is how the Romans governed before their fall.

There is similarity between the treatment of the Irish people by the absentee British landlords in the hungers of the eighteen forties and fifties and the treatment of some elements of our own population, for example during the sub-prime housing crisis of 2008 to 2012 where so many lost their homes and livelihoods. Fortunately our financial outcome, although devastating for many, has not been as severe as a million dead and another million deported from our homeland. At least not yet. Technology has changed but man’s nature hasn’t.

After Antietam, it would be fifty four years before descendants of the Irish Brigade, members of the Irish Clan na Gael in the United States, could muster the resources and will to organize a pivotal rebellion against oppression in their beloved Ireland at the 1916 Easter Rising, the martyrs’ insurrection starting their revolution for freedom from tyranny. In my second novel, Entente, I explore the attempts of the Clan na Gael to solicit the help of the Germans to overthrow the British tyrant in their Ireland, including the development of another Irish Brigade with an entirely different character.