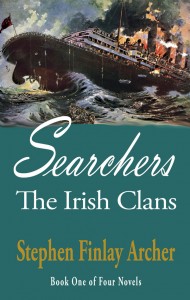 Well it’s done and off to the printers!!! Copies of Searchers, The Irish Clans Book 1 will be available on March 2 and my Amazon account should be set up by that time and linked to this website.

It’s like sitting in the Mission Director’s Center at Cape Canaveral in the last few hours before launch of a new satellite system. You think over all the decisions you made that got the spacecraft designed, tested and prepared for going into space. If it is a weather satellite so many people are depending on getting accurate weather forecasts. It saves lives . . . many lives. The spacecraft is buttoned up inside the shroud on the top of a 10 story rocket which is to a great extent huge tanks filled with explosive fuels. Too late to redesign. What have I missed? Upwards of 5000 sets of hands were involved in the design, production and testing of this satellite system. And how about the launch vehicle. Will it work, putting the spacecraft into the correct orbit for mission success?

It’s like that with my novel. Ready to launch. Too late to redesign with the potential of blowing up in my face. Will it be successful getting into the correct orbit where people will see it? And will it appeal to many people? This is more unknown than the precision of a launch vehicle and spacecraft that has been designed, built and tested prior to launch. More nerve wracking. Time will tell.

The publication of Searchers through the Manzanita Writers Press here in Angels Camp, CA was both a labor of love and a strenuous endeavor to meet the delivery deadline of March 3. This is because my wife Kathy and I will be heading for Ireland on March 4 to conduct the book launching and signings there throughout March.

Our itinerary is as follows;
Arrive Dublin on March 6,
Searchers Book Launching at the Temple Bar on Tuesday March 8, from 5:30 – 8:00pm,
Book Signing event at Clancy’s Bar in Cork City on Saturday March 12, from 4:00 – 7:00pm
Book Signing at the Polymath Bookstore in Tralee on Monday March 14, from 1:00 – 3:00pm
Attendance at St. Patrick’s Day parade in Dublin on Thursday March 17,
Book Signing at the Four Masters Bookstore in Donegal town on Wednesday March 23, from 2:00 – 4:00pm.
Attending Easter Rising Centennial events on March 26-29.
We will be signing books at the Temple Bar Trade Company during periods when we will be in Dublin.

The principal centennial events in Dublin are as follows;
March 8 International Women’s Day at Royal Hospital Kilmainham, Keynote address by President Michael Higgins followed by a concert by the RTE Concert Orchestra
March 26 Garden of Remembrance Ceremony
March 27 11:30am Proclamation of Independence at the GPO, President will lay a wreath and there will be a St. Stephen’s Green Parade
Choir Concert at Collins Barracks National Museum
March 28 Imagining Home America Concert at the National Concert Hall
March 29 Imagining Home England Concert at the National Concert Hall
Liberty Hall Ceremony to honor James Connolly and the ICA.

The Ottawa Writers Conference which will be held April 14 to 19 will have at least one session dedicated to the centennial of the start of the Irish Revolution. I plan on attending and holding a Book signing event at bookstores in Ottawa and Toronto Beaches.

I plan on attending the Ireland 100 festival at the Kennedy Center for the performing Arts in Washington DC during the week of June 1 – 5 and will hold a Book Signing event during this period at a Washington bookstore.

I will keep you posted on where and when I will hold book signings in Ottawa, Toronto and Washington DC. Please join me if you are in the neighborhood.

You will notice from both this website and my Facebook page, that I have reverted to my real name, Stephen Finlay Archer. I was prevailed upon to do so just before Book 1 went to print. It simplifies everything.