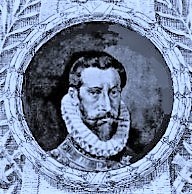 Last week I described the efforts by the brutal, conquering English in Munster in the late 1500s, and of the brave, defending Irish Chieftains leading up to the fateful Battle of Kinsale in the Nine Years War.

Queen Elizabeth had sent more capable warriors to Ireland in 1601 under the leadership of Lord Mountjoy as Lord Deputy with support by George Carew in Munster, under him George Wilmot in Kerry, and Henry Docwra in northern Derry to separate and attack the O’Donnell and O’Neill forces.

As I have mentioned, Carew was deceitfully cunning in negotiating with and capturing Florence MacCarthaigh Reagh in the south who was organizing with the Spanish. Meanwhile, Docwra attacked Derry with the help of Red Hugh’s traitorous cousin Niall O’Donnell who mistakenly expected to be named Earl of Donegal after the English conquered Ireland.

When Derry fell to the English in the summer, Red Hugh realized that he and The O’Neill needed to combine forces to drive the English infidels out. They needed to combine with their Catholic Spanish ally’s army which was planning to land in the west north of Muster in more friendly territory at Galway and close enough to the Northern Clans. In this way they could continue to fight guerrilla warfare in the Hills which had been so successful against the luck-less English commander Devereux.

Disastrously, due to an all-too-familiar ill-wind at sea, the Spanish forces of 4000 soldiers led by Juan del Águila were forced to land at Kinsale, the Irish provisioners town on the south coast west of Cork City on September 23, 1601. It was not a well-fortified town to resist a siege. Unfortunately, additional Spanish ships carrying 2000 soldiers and much of their munitions were separated and diverted due to the weather. They were discouraged when their ally Florence was not there with an army to greet him.

Lord Mountjoy marched from the Pale and laid lay siege to Kinsale and the Spanish, hemming them in against the Celtic Sea. Of the 12,000 English forces who initially surrounded the port, only 7,500 remained by the time of the battle in January 1602 due to attrition from winter illnesses brought on by lack of supplies.

Red Hugh realized that his and O’Neill’s forces needed to integrate with the Spanish invasion force by marching south through English territory. He burned his own castle stronghold in Donegal Town to keep the English from using it and headed south into Sligo to the castle of Ballymote which he had cunningly purchased three years earlier. There, in early October 1601, Red Hugh and his brother Rory amassed his army of 4,000 gallowglass foot and 3,000 horse soldiers.

Pope Clement VIII failed to announce his support for the Catholic Spanish initiative in Ireland. This may have influenced the beleaguered southern clan chieftains to not rise up against their Protestant English overlords.

Hugh O’Neill initially was reluctant to march south, preferring to stay within his own territory to defend against the English. But Red Hugh convinced him that the remaining Clans needed to band together with the Spanish in a last-ditch effort to rid their country of the invading infidels.

While O’Neill led his forces south down an easterly path, cutting off supplies between the Pale and the English army at Kinsale, Red Hugh accompanied by his ally Richard Tyrell led an Herculean march south through the winter blizzards, fortunately across unusually frozen bogs. He arrived in Thurles, two-thirds of the way south, at the site of Holy Cross Church with the Holy Rood (Piece of the Cross of Jesus) at the feast of St. Andrew on November 30.

There he split his forces with a small contingent being sent west to liberate his compatriot, Thomas FitzMaurice whose southwest lands had been captured by the English under the leadership of George Wilmot a year earlier. His hope was that FitzMaurice could muster an army to aid in the cause at Kinsale.

Red Hugh headed south to a rendezvous point at Bandon, thirteen miles west of Kinsale. Somehow Carew’s army, which had headed north towards Thurles to intercept O’Donnell, missed him. Red Hugh estimated that the combined Irish army would be eighteen thousand plus the Spaniards and by his intelligence, the British army numbered only seven thousand. Good odds.

In December 1601, a secondary Spanish force of seven ships with 2,000 men led by Pedro de Zubiaur, which had been diverted from Aquila’s fleet by weather, landed at Castlehaven, west of Kinsale. They were quickly dispatched by the English navy under the leadership of Admiral Richard Leveson.

The scene was set for an all-out battle in the open plains just north of Kinsale in the dead of winter, a terrain that the English greatly preferred.

Next week – the battle!