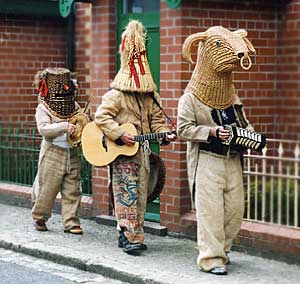 Irish Mummers, Hound of Ulster courtesy of Voice of the River Valley

Last week I wrote about the Irish Wren Boys dressed in straw and their procession on Boxing Day in Dingle, County Kerry that dates from centuries ago. This is one important vestige of the ancient Mummers movement.

The term ‘mummer’ means a person who wears a mask. Mumming in Ireland has many traditions usually performed in the Christmas season. Hanner’s Chronicle describes King Henry II’s celebration of Christmas in Dublin in 1172 as ‘…the sport, and the mirth, and the continual musicke, the masking, the mumming and strange shewes, the gold, the silver, and plate, the precious ornaments, the dainty dishes….’

According to an article by Ronan O’Connell in the National Geographic recently, Irish mummers dressed in straw have been going house to house during the Yule season performing plays or singing for four hundred years. Historically this custom was performed by all-male groups in the north and east of the island often menacingly portraying such characters as Oliver Cromwell, according to Henry Glassie in his book ‘All Silver and no Brass: An Irish Christmas Mumming.’ One traditional rhyme they used was,

‘Here I comes.
Fiddly Funny,
I’m Here to collect money.
All silver no brass,
Bad money will not pass.’

The theme was usually life and rebirth. Some say that this practice started in pagan times and was celebrated at Irish Samhain/All Souls Day (October 31, the end of the Harvest). Families made soal (soul) cakes to honor the dead and the practice of mumming on that date of the year has evolved to the trick or treating of Halloween.

In Christian times this practice of mumming has evolved in Ireland to the Christmas period, also a time of rebirth.

This custom was subdued during the Irish political revolution in most of the 1900s but is now enjoying a revival with interdenominational camaraderie. At Christmas time in Ireland, Mummers go door to door looking for food or drink and charity contributions in return for entertainment. Musicians usually accompany them.

Ronan writes about a mumming club in County Leitrim started 7 years ago by a local artist, Edwina Guckian. Along with three hundred mummers dressed in straw from local fields, they perform outside homes throughout December, finally burning their costumes in a ceremonial bonfire.

I am reminded of the popular rendition of the song “A Soalin’” sung by Peter, Paul and Mary so professionally, and by me in my youth, so unprofessionally,

Refrain:
Soal, a soal, a soal cake, please good missus a soal cake.
An apple, a pear, a plum, a cherry, any good thing to make us all merry,
One for Peter, two for Paul, three for him who made us all.

God bless the master of this house, and the mistress also,
And all the little children that round your table grow.
The cattle in your stable and the dog by your front door
And all that dwells within your gates we wish you ten times more.

What a wonderful harmonious trio of folk singers they were!

So I wish you all “ten times more” as we celebrate the holidays and look forward to a better year ahead!