Irish to the Core Blog 2 – Deadly U-Boats in WWI 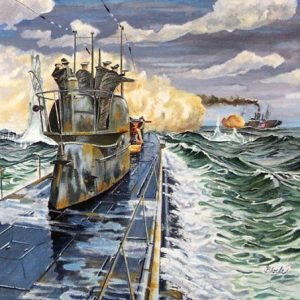 During the leadup to WWI, the British Royal Navy expanded its fleet of naval ships to keep ahead of the Germans. Britain had always ruled its Empire by control of the seas. The main way to defeat the Germans if war came was to choke off the flow of goods and equipment to them and any other country that supported them.

To limit the flow of materials into the Allied countries from America who would likely remain neutral, Germany developed the deadly Underseeboot (U-boat), over 200 feet long, carrying 10-20 torpedoes, and 30-60 sailors.  It could stay underwater for 2 hours, using a periscope to find enemy vessels.

Early in WWI the U-boats had free reign of the seas. They concentrated their attacks in dense shipping lanes such as the southern Ireland corridor. Under Kaiser Wilhelm II’s orders, they gave no warning to naval and neutral merchant ships alike. During the early 1915 Gallipoli campaign in the Eastern Mediterranean, U-boats sank 2 Dreadnaught battleships.

After sinking the Lusitania in May 1915 and then the Ferry Sussex with significant American deaths, the United States forced Germany to temporarily cease unrestricted submarine warfare and agree to return to centuries old ‘prize rules’ giving ships warning of attack. This curtailed the sinking of Allied shipping, so Germany attempted to break the British naval blockade in the North Sea with the major sea Battle of Jutland May 31-June 1, 1916, involving 250 surface ships. Afterwards, Britain still had a choke hold on the North Sea corridor.

Germany then reinvigorated submarine activities, sinking 1.4 million tons  between October 1916 and January 1917. They resumed unrestricted submarine warfare on February 1, 1917, with the risk that America would enter the war because stemming the transport of supplies to their enemies had become crucial to the success of their war effort.

Early in the war, the submariners were considered the elite of the German military services. Their losses were light. However, necessity was the mother of invention. By 1918 the Allies developed an early form of active sonar (ASDIC), high-frequency direction finding (Huff-Duff), crude depth charges and were protecting merchant ships in convoys with naval escort. The U-boats went from the safest service to the deadliest. Although they suffered extremely high casualties, losing 178 of their 373 U-boats and about 5,000 submariners (75 % casualty rate) in these underwater coffins, they had the greatest military effect on the outcome of WWI, sinking almost 13 million tons of allied shipping (5000 ships), and disrupting the allied war effort .

Here was just one example of how evolving technology turned the tide in the awful stalemate War-to-end-all-Wars that killed 17 million people.