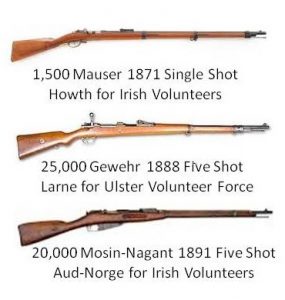 The Southern Catholic clandestine organization – Irish Republican Brotherhood (IRB) and its militant Irish Volunteers were supported by the American Clan na Gael (CnG) group including exiled Irish patriots. As the countries of Europe aligned themselves for world war in early 1914, the CnG and IRB were planning a revolution to free all of Ireland from the oppressive British to coincide with war on the continent. They believed that Britain would be otherwise preoccupied with fighting the Axis powers led by Germany. To be successful the IRB and Irish Volunteers needed weapons.

Meanwhile, in Northern Protestant Ireland the Unionist Ulster Volunteers were establishing a para-military force to oppose the proposed third Irish Home Rule initiative of Liberal British Prime Minister Asquith. If it became law, this bill would unify Ireland under Irish control centered in Dublin but still within the United Kingdom. To be successful the Ulster Volunteers needed weapons.

Clearly, the drums of war were building in Ireland as well as the rest of the world.

In December 1913, because of the unrest building in Ireland the British issued a proclamation that made it illegal to import arms and ammunition into the country.

Just before the world war broke out on the continent in August 1914, despite the proclamation, there were valiant gunrunning attempts, both in Northern and Southern Ireland. These efforts were handled differently by the two opposing forces.

The northern Larne gunrunning on April 24-25, 1914, was carried out in secret at night and employed a decoy ship as well as the munitions vessel. Although the police seemed to oppose this effort on the surface, in reality the British forces in Northern Ireland turned a blind eye to this operation.

The southern Howth gunrunning on July 26, 1914, was carried out in broad daylight as a propaganda coup and as an effort to begin arming the volunteers for revolution. It was openly opposed by the British police.

After WWI commenced, the southern Irish revolutionary forces tried to align themselves with Germany for military armament and support. In the USA CnG, John Devoy (New York) and Joseph McGarrity (Philadelphia) connected through the German US Ambassador Johann Heinrich von Bernstorff. McGarrity sent IRB member Roger Casement, who had supported the Howth gunrunning effort, to Germany in 1915-16 to acquire arms and men for the revolution. Just before the 1916 Easter Rising, the German Aud-Norge freighter brought arms for the Irish Volunteers to Ireland.

One group of winners in this Irish-British struggle and in the world war were the arms manufacturers. Although not the most important instigators, behind the scenes they promoted the countries into open and sustained warfare.