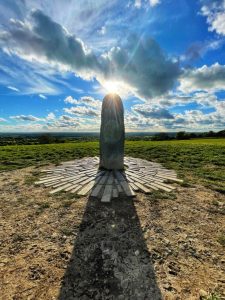 Last week I discussed the story that Robert the Bruce gave Cormac MacCarthy a stone for his support at the Battle of Bannockburn against the English in 1314 which was later incorporated into the battlements of Blarney Castle. Why was this stone that important?

There was a stone called Lia Fail (Stone of Destiny) that stood in the center of the An Forradh (King’s Seat) in the sacred ground of Tara north-west of what is now Dublin. From early times BCE this was the spot where the Irish High King was crowned. It is said that this stone would cry out three times when the rightful king put his foot against it.

In 496 CE Irish King Fergus (of the O’Donnell Clan) took this stone to Pictland (Scotland) where he became the first High King of Scottish Dal Riata. It is said that St. Columba (also of the O’Donnell Clan) crowned him on it at his monastery on the island of Hy (now Iona). From that point onward the Scottish kings were crowned on it eventually at Scone.

In 1296, English King Edward I (the Confessor) defeated John Balliol, King of Scots at Dunbar two years before finally conquering William Wallace’s (Braveheart’s) army at Falkirk, Scotland during the First War of Scottish Independence. At that time, Edward captured the Stone of Scone and took it to London. There he had a wooden throne made with a slot underneath for the stone. From thenceforth all the kings and queens of England and then Great Britain were crowned upon it. That throne resides in Westminster Abbey. You can see it there today. But what happened to the stone? 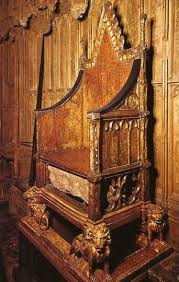 Edward I Throne and Stone of Scone (Lia Fail?)

On Christmas Eve, 1950, four University of Glasgow students broke into the Abbey and stole the 400-pound stone, breaking it in two pieces. Four months later the repaired stone was discovered draped in the Scottish flag on the high altar of the ruined Arbroath Abbey in Scotland. The stone was returned to Westminster Abbey.

In 1996, seven hundred years after it was stolen by Edward I, British Prime Minister John Major unexpectedly returned it to Scotland where it resides in Edinburgh Castle with the understanding that it will be returned to London for future coronation ceremonies.

But what does all this have to do with the Blarney Stone?

There is some evidence that the stone that Edward took to London was a replica and that the monks at Scone Abbey hid the actual Lia Fail for safekeeping. The current stone is pale yellow sandstone, which is indigenous to the area of Scone, Scotland.

There is another story believed by the British Israeli Association that Lia Fail was Jacob’s pillow when he dreamt of the ladder to heaven and God’s words to him at Bethel (Genesis 28:10-22). They believed that his sacred rock was brought to Ireland, one of the furthest known locations at the time to keep this Hebrew relic from falling into the hands of the Babylonians of Nebuchadnezzar. The indigenous rock in the area of Bethel is certainly not pale-yellow sandstone. If this is true it would lend credence that the current Stone of Scone is not Lia Fail. 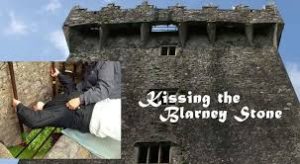 There is a story told on the website for Blarney Castle that Robert the Bruce retrieved the true Stone of Scone, cleaved it in half and gave that half to Cormac to return it to its rightful Ireland.

So if you visit Blarney Castle and kiss the Blarney stone to be granted eloquence then you just might be kissing the stone that Jacob laid his head on when he had his immortal dream.