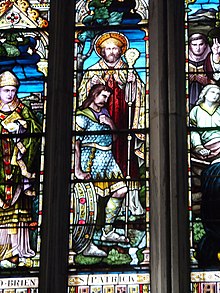 Baptism of KIng Óengus by St. Patrick on Rock of Cashel circa 470 CE

Having given some background on the oppressive conditions forcing the Irish revolution of the early twentieth century, the paramilitary Volunteer organizations arming for it, and its American Irish support in my previous weekly blogs, I turn now in future blogs to the ancient history of Ireland and some important circumstances and events that eventually led to this fight for freedom and justice.

I start with one of the few Irish Clans who ruled a sector of Ireland for over a millennium, the MacCarthaigh (McCarthys). I choose that clan not because one of the main revolutionary heroes in my novels has this name, but because their influence in south-west Ireland over the centuries imbued a fierce spirit of Gaelic Irish independence that propelled the Counties Cork and Kerry patriots to drive the oppressive English out of their lands.

The history of the Mac Carthaigh Clan began in early 400s CE when the Eóganachta Clan arrived from what is now Wales to what is now County Tipperary, southern Ireland in the Kingdom of Munster. This dynasty was founded by Conall Corc who chose Cashel as his royal seat because of its high rock outcropping.

The clan flourished there under Druid influence until sixty years later in about 470 when Corc’s descendant Munster king, Óengus mac Nad Froich was baptized by the founding Christian Saint Patrick on the Rock of Cashel. This was believed to be the second Irish King to be baptized. As the story goes, Patrick pounded his crozier on the rock three times during the ceremony, one of which pierced the king’s foot. Since the king believed that this was a matter of devotion to Christ, St. Patrick was spared. To this day you can see the ancient Cross of St. Patrick within the fortifications on the Rock, supposedly on the baptismal spot.

Although the Annals are vague, there is some indication that some faction of the House of Óengus later migrated to northeast Ireland after 500 and that dynasty may have ruled overlords of the kings of Dál Riata – the country which included the west of Pictland (Scotland) and Ulster.

In the period immediately before 1000 with a total population of 500,000 people, Ireland had over 150 kings who fought each other constantly for territory, treasures and love interests. The Vikings had been making inroads into Ireland for two centuries with their strong hold in what is now Dublin. Then Brian Boru, the High King of Athlone in southwest Ireland began to conquer. In 1002 he subdued the Eóganacht House of Óegnus at Cashel. He continued his conquest of all Ireland and in 1014 at the Battle of Clontorf in Dublin he was victorious over the Norsemen, driving them out of Ireland. More of that later.

Carthach was the Eóganacht king who had been a bitter rival to High King Boru. His son was known as Muireadhach  mac Carthaigh, i.e. son of Carthach. The Clan now named Mac Carthaigh was eventually pushed out of its homelands around Cashel in early 1100s by Boru’s descendant O’Brien Clan.

They moved south and west and established three Mac Carthaigh Clan kingdoms after Munster was split at the Treaty of Glamire in 1118 south (Desmond) and north (Thomond). One of Muireadhach’s sons, Tadhg became the first King of Desmond (Cork and most of Kerry Counties).

This dynasty would rule for most of five centuries before the British finally conquered the remaining clans at the Battle of Kinsale in 1601.

More of this famous clan in next week’s blog.