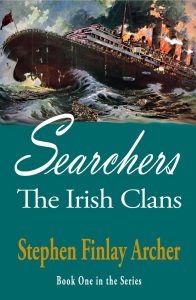 The Irish Clans: Book One: Searchers

Happy New Year to one and all! Let’s plan on 2022 being the year when we can all get back to our life pursuits without fear of serious illness to ourselves, and to others because of us!

At the outset of this new year, I want to take the opportunity of sharing with you the December reviews provided by reputable Midwest Book Review, their senior editor, Ms. Diane Donovan of Donovan’s Literary Services for the existing set of five “The Irish Clans” novels. My publicist, Ms. Sherry Frazier of Frazier Public Relations had requested this thorough review of the entire story since it is best read starting with Book One, Searchers and Midwest graciously accepted this abnormal request.

I will address the reviews, book by book over the next five weeks.

Searchers: The Irish Clans is the first book in a series of novels about the Irish revolutionary wars between clans. It’s especially recommended for historical novel readers who want an in-depth touch of the military, social, cultural, and religious history of Ireland’s clans, politics, and Celtic heritage.

It’s a fictitious epic that presents the premise of a secret Clans Pact that hides wealth from the British, crafting an engaging series of clashes and scenarios from real-world experiences.

In this opening story, a death in 1915 Ireland fuels the flames of revolution while concurrently, in America, Irish immigrants who remain connected to the Old Country become immersed in the conflict. Three very different characters are drawn into this fray: Claire, an Irish girl who has amnesia after surviving the Torpedo sinking of the Lusitania ocean liner, and is renamed Morgan by Tadgh. She has connections to the past that could influence future choices; Tadgh, a rebel sea captain who becomes embroiled in a decision that will lead to his validity as a Clan Chieftain; and Collin, a Canadian husband faced with an impossible choice.

This story operates on many levels as it outlines a search for identity, wealth, redemption, and validity which captures disparate personal transformations.

Irish peoples around the world became embroiled in the revolutionary clashes that emerged between 1915 and 1923. Searchers displays an attention to detail that captures these events as they evolve on more than the home soil of Ireland.

From growing commitments to the cause displayed by Morgan and others to relics, secrets, and emerging political battles with the British, Stephen Finlay Archer crafts a story replete in the special interests, that’s both personal and political, centered on and reflected by characters who stand up to each other to support their ideals of the Irish identity.

Dialogue between these characters neatly sum up and outline many of these dilemmas: “Don’t ya be throwing Denis McCarthy’s words back at me, Sean,” Tadgh protested. “Parnell tried the pen, and the British bastards spoke with forked tongue. Look what’s happening to the Home Rule Bill to finally integrate our homeland. These demons are allowing for the buildup of arms for the Ulster Volunteers to stop the bill by force if necessary.”

Readers might think they need prior familiarity with Irish history in order to appreciate the evolving scenario in Searchers, but the only prerequisite is an interest in Irish culture and affairs.

Archer takes care of the rest, personalizing the simmering politics of the nation and times by creating a host of characters who display special interests and values. These take on new meaning under the changing, volatile political environment that affects the world.

The result is a fine introduction to the series that successfully crafts a series of encounters and scenarios to set the stage for future stories of each individual and Ireland as a whole. Historical fiction collections and any interested in Irish heritage will welcome the detailed survey introduced in Searchers: The Irish Clans.

B) Author Insight for Searchers

I discussed the dastardly sinking of the Lusitania on May 7, 1915 in Blog 1 and the funeral and eulogy for the people’s patriot O’Donovan Rossa on August 1, 1915 in Blog 17. Both critical historical events are pivotal to the story in “Searchers”.

My story opens on October 4, 1600 in Donegal Castle, Donegal Town.

The British and Irish have been fighting the Nine Years War in the mountains of Ireland. Queen Elizabeth I was determined to conquer what she called the heathens. Through guerrilla warfare, the remaining Irish Clans continued to be victorious. Northern Clan Chieftains O’Donnell of Tyrconnell (Donegal) and Hugh O’Neill of Tyrone led their armies to victory at the Battle of Clontibret (1595) and Yellow Ford (1598).

After these defeats, Queen Bess assigned her favorite Earl, Robert Devereux of Essex with an army of 17,000 English troops to conquer the Clans. Through a series of missteps and misfortune, and after a sound beating by O’Donnell’s forces at Curlew Pass in 1599, Devereux entered a parley with O’Neill and agreed to a truce without victory. Then he returned to England before the Queen had given her concurrence. He fell out with her and attempted a coup that was unsuccessful. Essex met his fate on the chopping block at the Tower of London.

His replacement, Lord Mountjoy was a more able military leader. By the fall of 1600, the English under the command of Henry Dowcra were taking over Derry (west of Donegal in Ulster) and George Carew, President of Munster was succeeding in quelling rebellion in the south (Munster).

The two principal southern Chieftains who still stood firm against the British onslaught were Florence McCarthy and James Fitzthomas Fitzgerald, Earl of Desmond. McCarthy was instrumental in support of O’Donnell and O’Neil by soliciting aid from King Philip III of Spain.

In my story, there is a clandestine meeting of Clan Chieftains Red Hugh O’Donnell and Florence McCarthy in October 1600. They agree to fight to the death for Catholic Ireland but admit that the future looks bleak for the Clans. They decide to individually hide their wealth of a thousand years and pass interactive talismans down to their first-born heirs. Through divine intervention their clans would reunite, north and south, when the time was ripe for revolution to solve the clues, find these treasures, and use them for the cause of Irish freedom from brutal British servitude.