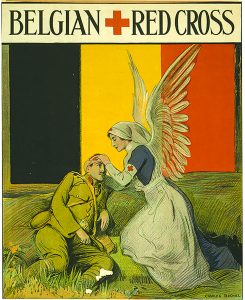 British WWI Poster
Support for the Belgian Red Cross
Painting by Charles Buchel, 1915
Courtesy of the Library of Congress LC-USZC4-11243

In my novel Entente I utilized this image to depict my characters Tadgh and Morgan, soldier and nurse, crusader and Florence Nightingale, embroiled in the war-to-end-all-wars.

The British used this poster to gain support for the Belgians who had so valiantly held the line against such overwhelming odds after Germany had invaded and occupied so much of their country in the Summer and Fall of 1914.

By the Treaty of London, 1839, Belgium, among other countries like The Netherlands was supposed to be neutral in future European wars. But when WWI started, Germany needed to sweep north-east past the French defenses in order to conquer that country and Belgium stood in their way.

King Albert I of Belgium refused entry by declaring “Belgium is a nation, not a road,” and his 65,000 troops took on the mighty German army. What ensued was referred to as The rape of Belgium.

The herculean effort which halted the German advance at the north-western-most tip of Belgium in late October 1914 was described by the Belgian Minister of Justice Carton DeWiart in his inspiring address in London in June 1915, wherein he sought support for his struggling nation. You can read this plea in its entirety at http://www.firstworldwar.com/yser_dewiart.htm.

By the time that this monstrous war was over, seventeen million soldiers and civilians were dead and the arms manufacturers had “made a killing”, pun intended.

This should have been more than enough to demonstrate that world-wide war should be abolished. Yet we humans did not learn enough of a lesson to avoid WWII which started twenty-one years later and killed forty to sixty million people with much more sophisticated weaponry.

As Buffy Sainte-Marie wrote and sang,

“He’s the universal soldier and he really is to blame,
But his orders come from far away no more,
They come from him and you and me and brothers can’t you see
This is not the way to put an end to war?”

I chose a different approach by writing a poem commemorating the millions of soldiers who fought and died valiantly for their country under never-ending hellish conditions. They were doing their duty to their own superiors. This was my dedication for Entente.

One minute of silence once a year doesn’t seem to be enough remembrance.

Have we now learned our lesson before a nuclear holocaust wipes out humanity on our planet?