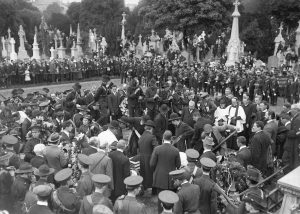 In weekly Bog #11 I wrote briefly about another of the key members of the Cuba 5 group who emigrated to America after being released from jail, namely Jeremiah O’Donovan Rossa.

Like John Devoy, Rossa was born before and lived through the Great Hunger. His parents also were tenant farmers, hard hit during the 1840-1850s. Rossa was his chosen name, adopted because his ancestors held letters patent in the townland of Rossmore prior to the 1700s British confiscations.

While a shopkeeper in West Cork, Skibbereen in 1856 he established the Phoenix National and Literary Society, with the objective of liberating Ireland by force of arms and reviving the Irish culture. He chose Phoenix to represent the Irish cause rising from the ashes of martyrdom.

Two years later, with the advent of the Irish Republican Brotherhood (IRB), the two organizations merged. Rossa was arrested and jailed without trial but was released a couple of years later to become in 1863 the business manager for James Stephens’ (Blog # 8) revolutionary newspaper “The Irish People.”

This paper was suppressed in 1865 and Rossa was arrested again and held on charges of treason felony, and sentenced to penal servitude for life. He was defiant in prison and manacled for 35 days for throwing a chamber pot at the warden. He also spent time in solitary confinement on bread and water rationing. During this period he earned the love of his fellow countrymen as the people’s patriot for his stand against the British oppression. Kind of an Irish “Cool Hand Luke”.

With the Fenian amnesty of 1870, Rossa was released to be exiled from Ireland forever and he became one of the Cuba Five emigrating to America, New York City.

Here he joined Devoy as a member of the Clan na Gael and established another republican newspaper “The United Irishman” dedicated to overthrowing Britain from Ireland. Through the paper he raised money called the ‘resources of civilization fund’ for armament and dynamite to implement his plan to bomb English cities.

This dynamite campaign was implemented in the years 1881 to 1885, targeting infrastructure, government military and police in Great Britain. All told, 80 people were injured with one fatality. This caused the British to establish the secret police group named Special Branch. Again the suppressed people in Ireland rejoiced at these initiatives, although the IRB was against them. They didn’t need Britain riled up further.

Attempts by Britain to have Rossa extradited were unsuccessful. In 1898 he explained his revolutionary life; “I’ve been called a madman . . . why shouldn’t an Irishman be mad; when he grows up face to face with the plunderers of his land and race, and sees them looking down upon him as if he were a mere thing of loathing and contempt!”

When Rossa died on Staten Island in 1915, the IRB was quick to capitalize on the propaganda value of the moment. Senior member Tom Clarke cabled Devoy to “send his body home at once”.

The funeral procession contained 20, 000 people and the spectators numbered over a hundred thousand, so great was the feeling for this ‘Old Fenian’. Padraig Pearse, the academic leader of the brotherhood delivered perhaps the most stirring eulogy of the Irish revolution at the Glasnevin Cemetery service in Dublin on August 1, 1915, ending with,” They think that they have purchased half of us and intimidated the other half. They think that they have foreseen everything, think that they have provided against everything; but, the fools, the fools, the fools! — They have left us our Fenian dead, and while Ireland holds these graves, Ireland unfree shall never be at peace.[“

Less than a year later, revolution would erupt with the 1916 Easter Rising.