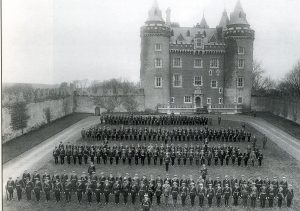 Ulster was an ancient northern Ireland province which split into several kingdoms in medieval times, principally the O’Neill Clan in the north-East and the O’Donnell clan in the north-west. In those times the clans were Irish-Catholic, having been educated by the Great saints of Ireland and their descendants.

In the early 1600s under the reign of King James I of England and with the clans finally conquered, the monarch instituted a “plantation” of Protestant Scots to steal the land from the defeated Gaelic people. This anglicizing and controlling force was largely successful in suppressing the native Irish people and the English way of life thrived in Belfast and beyond. In the 19th century Belfast became the industrial center of Ireland due to its formidable shipbuilding and linen industries.

Britain’s control over the rural north-western part of Ireland west of (London)Derry was however tenuous at the turn of the 20th century, with Donegal, especially having suffered brutally during the Great Hunger potato famine.

The Irish Unionist Alliance (Party) was established in 1891 to oppose plans for Home Rule for Ireland. The fear was that Dublin would become the industrial center and the Catholic majority would subvert the mostly Protestant north. In total a significant fraction of the Conservative British House of Lords tacitly supported the IUA. Sir Edward Carson became a prominent leader of this movement forming the Ulster Unionist Council and drawing up plans to establish its own government if Home Rule was enacted.

In 1912 the Ulster Volunteers militia was established which grew by 1913 to 220,000 strong where Ulster militiamen signed the Ulster Covenant to use all means necessary to defeat Home Rule. They were now called the Ulster Volunteer Force (UVF). It was during this period leading to the start of WWI that Britain’s Liberal Government under Prime Minister Asquith forced through a 3rd Home Rule Bill for Ireland that would give it self-governance but with continued allegiance to the crown. Britain would withdraw its forces from Ireland centered at the castle in Dublin but there would still be a Lord-Lieutenant from Britain with some oversight. Carson planned to get at least six of the northern counties exempted and then WWI broke out. Home Rule fulfillment was postponed indefinitely.

Carson succeeded in getting the majority of the Ulster Volunteers to support Britain’s forces on the continent to show unity and hopefully prevent Home Rule from being implemented at least in Ulster after the war that most thought would be short.

The 36th Ulster division fought with the 16th  and 10th Irish Divisions, the latter of which was decimated at the Battle of Gallipoli. The remaining divisions suffered heavy losses in the Battle of the Somme and the rest were effectively wiped out in the German spring offensive in 1918.

Due to rising tensions with the southern Republican forces and government, 3rd Home Rule bill was never implemented. What was left of the UVF was disbanded on May 1, 1919 where Commanding Officer Richardson stated:

“Existing conditions call for the demobilization of the Ulster Volunteers. The Force was organized to protect the interests of the Province of Ulster at a time when trouble threatened. The success of the organization speaks for itself, as a page of history, in the records of Ulster that will never fade.”

But the Great war only postponed the inevitable in Ireland.