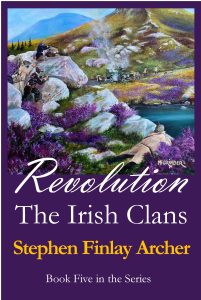 I hope you have been enjoying my Irish weekly blogs during this last half of 2021. I will continue to provide what I think are interesting facts and stories which are Irish to the Core.

Today I offer you a story about the beginning of the Irish War of Independence up to its escalation point, Bloody Sunday in Dublin on November 19, 1920, in the form of my fifth novel in my The Irish Clans series.

Revolution is now finally published in paperback version on Amazon just in the nick of time for the holidays, see below. The e-book will soon be available.

Irish republican rebels picked up the cause for freedom from the 1916 Easter Rising martyrs, switching tactics back to the guerrilla warfare of their ancestral Clans. Read how the McCarthys and O’Donnells help wage this war while continuing their search for ancestral treasure to help this just Cause.

I offer the following 5-Star review of this novel for your consideration by Dee K. Marley, owner and Manager of the Historical Fiction Company, a well-respected and pertinent press and review company, www.thehistoricalfictioncompany.com.

He counseled Michael Collins to act as if the Republic was a fact. He would often say, “We defeat the British by ignoring them. As the American John Adams once said, ‘Revolution starts in the hearts and the minds of the people.’”

This immersive and jam-packed story begins with the Irish revolution in 1915 and extends to the civil war ending in 1922 to 1923. To say this is epic is putting it mildly, and to just simply note that there are mythological elements which bind the past and the present would not do the book justice.

The author brings to the reader an incredible history of the McCarthy and O’Donnell Clans, and while history tells of their defeat in ancient times, they are by no means extinct. Linked by blood and a medieval pact across the ocean, Ireland and America, the lives of the characters entwine in a quest to support the revolution headed by none other than the infamous Michael Collins. While one part of the family, Collin and Kathy O’Donnell, seek to begin a new life, settling in a home and raising children, in Toronto Canada, another part of the same family, Tadgh and Morgan McCarthy, fight on the front lines to bring freedom to Ireland, fighting alongside Michael and a host of other revolutionaries.

The connection begins with the Black Tom explosion near Ellis Island which damages the Statue of Liberty, a fireball which nearly kills Collin and Kathy… and links Germany to the Irish Clan na Gael who is trying to use the German war to their advantage… that is, to find a way to export guns from America to Ireland for their cause while hiding the shipment under pretense that the guns are going to Britain for the war effort. Enter Tadgh McCarthy.

Tadgh uses his contacts in America while staying with his wife’s brother, Collin, to put the deal in motion. All is set and all goes well… at least for a time. Without giving away any spoilers, the author does a remarkable job in revealing the actual history of the time period, the passion and the patriotism fueled in the fiery hearts of Ireland’s Gaelic heritage… not just during WWI but tracing the roots into the far past where religious myths and divine intervention, where ‘luck’ plays a role in unearthing a vast Clan treasure, one which funds the revolution.

In one quote from the author, he states that ‘readers who are interested in Ireland’s struggles for freedom and its storied but often mystical history will enjoy The Irish Clans series. Readers who enjoyed The Da Vinci Code, National Treasure, or Outlander will be enthralled by my stories.’ I have to concur his statement, for the essence of all three of those books resonates in just this one book alone, and now I am intrigued to start with book one and read them all.

At the heart of the story is real people who simply want a better life for themselves and their families, and Mr. Archer does a remarkable job at offering us well-rounded, passionate characters in extraordinary circumstances. This book is alive with action and lush detail, giving the reader an Irish history lesson wrapped in an intense and captivating story.

This is drama to the ultimate level. It has it all – history, adventure, intrigue, war, passion, love, escape, betrayal, sorrow, pain – all the elements which connect us all as humans. This engrossing book is a voice speaking from the past and linking history to the possibilities of myths and the promises of the future.

I began this review with the poignant quote stated to Michael Collins, the quote by John Adams of revolution beginning in the hearts and minds of the people. This vibrant story captures this in every detail – the lengths a person, a country, will go to find freedom from oppression. Every society has its story of freedom. This is Ireland’s story, and the implications echo across generations and across oceans. ‘Man’s inhumanity to man’ screams loud in this book, the sacrifice, the blood, the bravery, and desperation for justice.

From a reader’s standpoint, the prose was easy to follow, and very engaging, providing just enough history to infuse knowledge while not diverting from the storyline. Mr Archer is quite the original storyteller, taking elements from all the aforementioned books and crafting a well-told story; however, my one side point is that about halfway through, I felt I was reading two different books. When the storyline veered from Bloody Sunday to the search for the ancient lost medieval treasure, I felt as if I switched books… not so much in engagement and interest (as the story still intrigues) but just in the flow. I understood why the switch was necessary as Archer introduced the mystical Celtic vein, but I did feel like I went from reading “Rob Roy” to “National Treasure.” Overall, though, even with the switch, I was always immersed in the story and the development of what happens to the characters and their fight for freedom.

Some of my favorite passages from the book:

The side trip taken by Collin O’Donnell to Independence Hall in Philadelphia when he sees the Liberty Bell – “The impact of liberty, the concept of freedom, resonated. There was damage, that crack, but he took comfort in the fact that history on the side of righteousness had prevailed. Perhaps this would be a model for Ireland.”

The brutality and oppression experienced by the revolutionaries – “The IRA had just killed three soldiers in Dublin, the first such deaths in that city since the battles in the Easter Rising. As a result, Churchill authorized the Black and Tans to begin burning towns and killing civilians. This reminded Griffiths of the slash and burn tactics employed by Cromwell’s monsters during the Confederate wars of the sixteen hundreds. Something drastic had to be done.”

“God in heaven, this is a tragic day for Ireland.” – the presentation of Bloody Sunday is heartbreaking. Michael Collins ‘disappears like a ghost into the fog’ after Tadgh and Morgan survive the episode at the stadium, and Tadgh vows to him to find a way to continue to help the cause. Thus, he and his wife, Morgan, delve further into their family history in search of the treasure and secrets hidden in the Book of Ballymote.

I am left on the edge of what is to come, and I look forward to continuing the saga with Tadgh and Morgan McCarthy.”

Check out Revolution at Amazon along with my other four novels in The Irish Clans series at my Amazon author page at https://amzn.to/3gQNbWi.

Happy and safe holidays to you and yours!