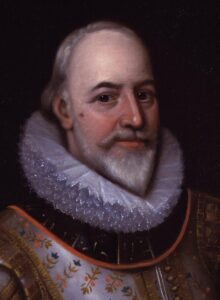 In the last blog I mentioned that George Carew was a compatriot of Sir William Temple, 4th Provost of Trinity College in Ireland. They were born and died in the same timeframe.

Today I want to give you more information on this soldier/politician who played a large part in the demise of the Gaelic way of life.

From 1574 onward, Carew was in the Crown’s service in Ireland and in 1579–1580, he led a regiment of Irish infantry, then a regiment of cavalry, during the Second Desmond Rebellion.

Carew was much liked by the queen, and by her principal secretary, Sir William Cecil, and his son, the future secretary, Robert Cecil.

In May 1596, Carew took part in the expedition to Cadiz with the Earl of Essex, William Temple and Henry Docwra, in 1597 in the expedition to the Azores and in the same year during the 3rd Spanish Armada invasion attempt. He was appointed treasurer at war to Essex in Ireland in March 1599, and on the latter’s sudden departure in September of the same year, leaving the island in disorder, Carew was appointed a lord justice.

Carew was appointed President of Munster on 27 January 1600, at the height of the Nine Years War and landed with Lord Mountjoy at Howth Head near Dublin a month later. He enjoyed wide powers, including imposition of martial law, and excelled in the politics of divide and rule. He interviewed the successor to the Earl of Clancarty, Florence MacCarthy, in the spring of that year, after an unjust attack by presidency forces on the MacCarthy territories prior to his arrival.

In August, Carew had accepted a reinforcement of 3,000 troops from England, but in the following May was dismayed when Mountjoy, who replaced Essex took 1,000 from him to supplement the crown army in its northern campaign for Docwra, at a time when the threat of a Spanish landing in the south was at its highest.

In the summer of 1601, he duped Florence MacCarthy into meeting with him in Cork under assurance of safe passage. He arrested the Gaelic chieftain and threw him in prison in the Tower of London where he could do no damage during the upcoming Battle of Kinsale.

Carew remained on and, although he failed to intercept Red Hugh O’Donnell on the rebel’s remarkable march southward to relieve the Spanish forces at Kinsale in the winter of 1601, he did great service before and after the Battle of Kinsale, as he raided castles in the surrounding region in order to remove the advantage the Spanish had expected upon their landing.

In 1602, Sir George sent a spy named Blake to find and kill Red Hugh O’Donnell in Spain before he could solicit further Spanish support in Ireland. Blake was successful.

In the course of this campaign, his violence devastated the rebels and the peasantry, and his conduct of the siege of Dunboy castle, the last major engagement in Munster during the war, was ruthless. The Dursey massacre, also called the Dursey Island massacre, took place in June 1602 during the Nine Years’ War on Dursey Island off the Beara Peninsula in southern Ireland. According to Philip O’Sullivan Beare, a group of around three hundred Gaelic Irish, including men, women, and child civilians, were killed by English soldiers under George Carew. Many were killed during the attack but those that surrendered were bound and thrown from the cliffs.

On the death of Elizabeth I, Carew was confronted unexpectedly with serious civil disorder, when several towns under his jurisdiction refused to proclaim the new King James I. The motives for these disturbances were probably combined with a desire for greater religious toleration with a demand for greater recognition of their civic independence. The trouble was especially severe in Cork, where serious rioting broke out. Carew was forced to send troops to restore order, and later tried, without success, to have the Cork city fathers tried for treason.

After the subjugation of Ireland, Carew sought recall to England, with failing health and anxieties of office affecting him. But it was only on Mountjoy’s resignation from the office of lord-lieutenant that he was permitted to return, whereupon he was replaced as president of Munster.

Sir George was one of the ruthless British overlords who destroyed the Gaelic way of life and livelihood in Ireland.