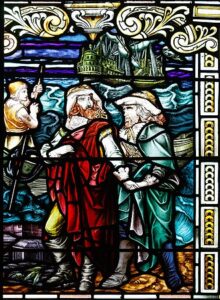 A stained glass window in the Guildhall in Derry, depicting the landing of Sir Henry Docwra at Culmore in 1600

Today I want to give you more information on Sir Henry Docwra, soldier/politician, a compatriot of Sir George Carew and William Temple, who played a large part in the demise of the Gaelic way of life.

Born in England in 1564, Henry was nine years younger than George and William. He became a soldier and fought for the English Crown in the Netherlands and France before serving in Ireland starting in 1584. He supported the campaign to subdue the Burke Clan in Mayo which ended inconclusively.

Docwra left Ireland around 1590. He entered the service of Robert Devereux, 2nd Earl of Essex along with George and William and fought beside him in the Spanish Wars including the Siege of Rouen in 1591-2, and in the campaign to capture Cadiz in 1596, where he was knighted by Essex in person for his “acts of valor”.

In 1599, to his “unspeakable contentment”, he was sent back to serve with Devereux during the Nine Years War, acting as his chief adviser on Irish military affairs. During Essex’s disastrous attempts to pacify Ireland, Docwra was mainly occupied with attempting to subdue the O’Byrne clan in County Wicklow.

He took no part in Essex’s controversial negotiations with Hugh O’Neill. These negotiations produced a set of terms called the Cessation, which was attacked by Essex’s enemies as a total English capitulation to the Irish.Docwra returned to England with Essex in the autumn of 1599. In 1600 he was sent back to Ireland as commander of an army of four thousand men and captured the ruined site of Derry in May 1600. He was criticized for concentrating his men at Derry, where an epidemic was raging: so many fell sick that his effective force was reduced to eight hundred men.

Being in Ireland, Docwra was not implicated in Devereux’s coup attempt against Queen Bess. He quickly gained the confidence of Essex’s successor as Lord Deputy of Ireland,  Lord Mountjoy, although they were later to quarrel over Docwra’s policy in Ulster.

Henry constructed Dutch-inspired star-shaped bastion forts, each with a strong earthen rampart, surrounded by a ditch, at the three sites of Culmore, Derry and Dunnalong. He engaged in several skirmishes with the Irish, reportedly winning their admiration for his courage and cunning, and was severely wounded by Black Hugh O’Donnell, a cousin of Red Hugh O’Donnell, chief of the O’Donnell Clan.

Throughout his career in Ulster, he showed remarkable skill in fostering divisions in the leading Irish clans, and he gained the support of several prominent Irish chieftains, including members of the dominant O’Neill and O’Donnell clans. His most notable diplomatic coup was to win for the Crown, at least for a time, the loyalty of Niall Garve O’Donnell, cousin and brother-in-law of Red Hugh. His attitude was simply that, so long as it lasted, the support of men like Niall was a political asset which the English should exploit to its fullest extent.

The winter of 1600/1601 was spent in further military expeditions, and in negotiations with the Irish. After the Battle of Kinsale in January 1602 down south, Henry joined forces with Mountjoy to finally crush Hugh O’Neill, who made his submission to Mountjoy at Mellifont in March 1603. This military campaign is said to have been one of exceptional savagery, resulting in the death of thousands of Irish civilians.

On the death of Queen Elizabeth I in 1603, it was Docwra’s firm action which prevented a rising in the north of Ireland by his chief Irish ally, Niall Garve O’Donnell, who was infuriated at not having been made Earl of Tyrconnell, a title which was instead conferred on his cousin Rory O’Donnell.

Lacking powerful friends in court, and having quarreled with Sir Arthur Chichester, Lord Deputy of Ireland, he only achieved being first Governor and Provost of Derry. He was succeeded in that position by Paulet in 1606, who was more punitive to the Irish. Henry’s temporary Irish ally O’Doherty rose up in 1608, killed Paulet, and burned down Derry. Docwra’s reputation as “the founder of Derry” which rested on his early attempts to develop Derry as a city, came to nothing.

Docwra’s policy of seeking to conciliate the leading Gaelic nobles of Ulster was now utterly discredited. He was accused of neglect of duty and undue leniency towards the native Irish and was retired to England in temporary disgrace. Following the Flight of the Earls led by Rory O’Donnell in 1607, and the O’Doherty rebellion, the English Crown no longer saw any advantage in conciliating the chieftains of Ulster. Docwra’s Irish allies were ruined, and many of them, including Donnell O’Cahan, Niall Garve O’Donnell, and his son Neachtain, died as prisoners in the Tower of London.

It was Docwra who was able to extract the famous Book of Ballymote for his compatriot William Temple at Trinity College from the O’Donnell clan by threatening to have Niall’s son executed.

Henry was one of the ruthless British overlords who destroyed the Gaelic way of life and livelihood in Ireland.

Detail of a stained glass window in the Guildhall in Derry, depicting the landing of Sir Henry Docwra at Culmore in 1600