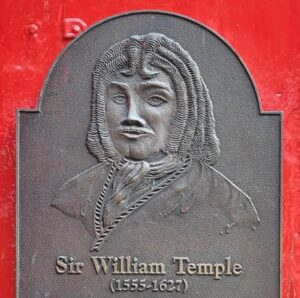 ​Last blog I discussed the brutal methods of the English during and immediately after their conquest of the Gaelic Irish at the Battle of Kinsale. Today I will discuss one of the Englishmen who came swooping in to plunder their Irish lands.

William Temple’s family name was said to have descended from the Knights Templar. He was born in 1555 in England, two hundred and forty-four years after the head of that powerful monastic order, Jacques de Moley and some of his knights were burned at the stake in Paris during the purge.

William was a scholar, a Ramist of logical methods and views. Initially destined for the law, he became a college professor. He then became secretary to famous men, including Robert Devereux, 2nd Earl of Essex in 1594. Essex was at that time a favorite of Queen Elizabeth I.

In 1596, he accompanied Essex along with two of his military leaders Henry Docwra and George Carew during the Anglo-Spanish War, winning a major victory by capturing Cadiz from the Spanish.

We have already discussed how ineffective Devereux was as a commander of the Queen’s forces in Ireland in 1599. William was with him there and returned with him to England with his tail between his legs the following year. When Devereux led a plot to overthrow the Queen in favor of King James VI of Scotland, William tried to separate himself from his benefactor. Devereux was beheaded in early 1601 and William was suspected of complicity by Sir Robert Cecil.

With the death of Queen Bess in 1603, Temple’s fortunes changed as he was released and sought further literary study. Due to this endeavor, he was finally granted the 4th Provost of Trinity College, Dublin position in 1609 by its Chancellor, Robert Cecil of all people. William knew this would be a lucrative assignment, up for land grabs.

Temple proved himself to be an efficient administrator and brought the Dublin University forward in method consistent with the University of Cambridge in England. Interestingly there were only twenty-eight scholars. He increased the number to seventy.

Probably most importantly, he developed his home estate and residence on a bar of land between the current River Liffey and a southern smaller parallel branch. The area became known as Temple Bar which is a favorite downtown street just south of the River Liffey today, containing many pubs, restaurants, and shops. The southern branch was filled in over time by William’s son John, who became Master of the Rolls for Ireland.

If you go to Dublin, I recommend that you visit the bright red Temple Bar Pub at the corner of Temple Lane for great food, beverages, and craic. The pub was built, some say on top of the old Temple Residence which was demolished in the Dublin Flood of 1802. Outside you will a relief picture of William and his wife Martha, who resided there some four hundred years ago.

It seems that Sir William, he was knighted in 1622, took advantage of his position to acquire significant tracts of land taken from defeated Gaelic warriors. The method by which he took over these properties came under scrutiny by the University council members in late 1626.

He might have been let go except that he died under mysterious circumstances that only his wife and son John were privy to on January 15, 1627.

One curious action he took was to seek out the famous Book of Ballymote held by the O’Donnell clan. I will write further about this book in a future blog. It is a compendium of secular and religious knowledge of the past, scribed for a Clan Chieftain in the late 1300s. Temple at least believed that this sacred book held strange and wonderful information essential for the future of Ireland, hidden in its pages. With the Flight of Earls in 1607, Temple finally acquired the book of many subjects for Trinity through questionable means, perhaps with his longtime compatriot Henry Docwra who was dealing with the remaining O’Donnells at the time.

The book resided at the college for many years and Temple had one segment of the book copied, that of the migration of the Jewish Nation to Europe.

There has been much speculation as to why he was so interested in that part of the book, especially with his last name.