Slash and Burn Conquest – Irish to the Core Weekly Blog 46 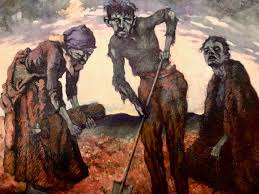 I have written before of Britain’s scorched earth tactics to conquer Ireland in the Desmond Rebellions of the 1580s, resulting in the deaths of one third of the population of Munster from either starvation or related diseases. The average life expectancy for the Catholic Irish citizen in those dark days was 28 years.

As John Dorney wrote, “these tactics, based on a determined resolve to break the military power of the Irish lordships and to ‘civilise’ and Anglicise Ireland, were far more prolonged and systematic.”

As famous poet Edmund Spenser who participated in this scourge of the Irish population wrote “The open enemy having all his country wasted, what by him, and what by the soldiers, findeth succour in no places. Towns there are none of which he may get spoil, they are all burnt; Country houses and farmers there are none, they be all fled; bread he hath none.” Later in the 1580s he wrote, “Yet sure in all that war, there perished not many by the sword, but all by the extremity of famine.”

Another English official, Pelham, reported that, “the poor people who live only upon labour and fed by their milch cows offer themselves their wives and children to be slain by the army than to suffer the famine that now in extremity is beginning to pinch them.”

Two weeks ago, I wrote that this brutal policy backfired on Mountjoy’s army just before the Battle of Kinsale when The O’Neill’s forces cut off their food supply from the Pale and almost decimated their army.

After Kinsale, The O’Neill and Rory O’Donnell retreated to their northern territories. Hugh O’Neill’s and his allies’ forces were dispersed and reduced to fugitive warfare in the hills and forests of central Ulster.

Chichester reported on one such raid; “We have killed, burnt, and spoiled …within four miles of Dungannon…we have killed above one hundred people of all sorts, besides such as were burnt, how many I know not. We spare none of what quality or sex soever, and it hath bred much terror in the people.”

As a result, Ulster suffered severe depravation. In this case, the deliberate destruction of food may have been combined with an exceptionally cold weather and a poor harvest to accentuate famine conditions in 1602-03.

In 1607, after the northern chieftains realized that King James had put a price on their heads, they fled to Continental Europe as I have discussed. Those few with means followed suit to escape the ravages of the famine brought on by the English.

Having brought the Gaelic Irish to their knees, the English then seized their lands, their castles, and their cities, killing the population at will. Protestant families were “planted” into Northeastern Ireland to overcome the strong Catholic religious beliefs of the defeated Irish.

I will show in later blogs how the British would continue to use barbaric “slash and burn” tactics to suppress rebellion and finally to attempt to quell the Irish War of Independence.

In some quarters of today’s world, the same heinous crimes are being committed. As Pete Seeger wrote in 1955 at the end of his powerful song “Where have all the flowers gone, – when will they ever learn?”