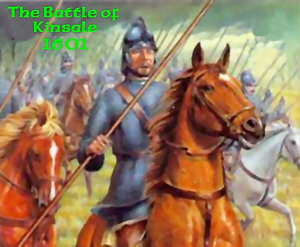 After the Spanish forces under Don Juan Aguila had been under siege for three months by Lord Mountjoy’s troops, they continued to hunker down in Kinsale in December 1601, waiting for relief from their Irish allies.

The English forces were incapable of surrounding the town and its surrounding area, but they had seized some higher ground to the north and subjected the Spanish forces to constant artillery fire. The English cavalry rode through the surrounding countryside destroying livestock and crops. This was a mistake. With their provisions cut off by O’Neill’s forces marching south, scurvy and dysentery were depleting their ranks. It is ironic that the English woefully lacked supplies when they were laying siege to the town that had been the provisioner port for most ships heading to America in those days.

The English navy under Admiral Richard Leveson arrived with a squadron of ten ships and cut off the town from the sea.

O’Neill rendezvoused with O’Donnell ‘s forces in Kinalmeaky seventeen miles northwest of Kinsale on December 21st. They were joined with patriotic Catholic forces from Munster and Leinster. Based on his scouts, O’Donnell announced that they outnumbered their sickly foe two to one. They marched southeast to Coolcarron four miles from their enemy’s position north of Kinsale.

On the night of January 2, 1602, the Irish and Spanish held council. O’Neill vehemently opposed engagement and wanted to besiege the ailing English instead. O’Donnell, ever impetuous, demanded immediate attack in a heated argument. The testy and reckless Don Juan backed O’Donnell, being impatient to fight back at his besiegers. O’Donnell won out and O’Neill eventually fell in line.

Just after midnight on January 3, 1602, the Irish in two columns, led by O’Neill, his ally Tyrell brought from Ulster and O’Donnell, marched for the ridgeline at Ardmartin overlooking the English encampment. English scouts on outpost that night observed the lit match of the Irish arquebusiers moving into position.

Mountjoy was told that the Irish were within three quarters of a mile of his camp. He beat to arms and set about to protect his camps and keep the Spanish contained. Then, at dawn, Mountjoy with Carew led his remaining forces to the Northwest to meet the Irish.

O’Neill, in the center arrived at the ridge to find the English cavalry in a row waiting for him. His enemy advanced immediately before the vanguard led by his ally Tyrell and O’Donnell at the rear could reach him. O’Neill’s force maintained their ground for an hour, with staunch support from Aguila.

Due to poor communications, neither of O’Neill’s allies showed signs of movement when the smaller English force continued to attack his position, cavalry leading.

Forced to retire and fearing a continued pitched battle in the open, O’Neill ordered a retreat into the marshes, planning to mire the English cavalry in the soft land. The English found a way across the bog. In the end, O’Neill and Aguila’s armies were overpowered by the English cavalry, who charged through the men, and contained flanking maneuvers by O’Donnell and Tyrell.

The tactics showed that the Irish infantry were poorly trained for pitched battle in formation against a well drilled professional army. It also showed up the English cavalry techniques using the lance, as compared with the Irish method of no stirrup and overhead spear throwing.

The Irish army left the field in some disorder while the supporting Spanish army now led by Ocampo tried to hold up the English charge. A massacre quickly ensued.

In the end of a very short battle, over twelve hundred Irish and two hundred and sixty of the three hundred Spaniards lay dead in the field. Prisoners had been instantly executed. This compared to about two hundred English dead.

On the night following their defeat, the Irish leaders held council. O’Donnell headed to Spain for more support. Red’s brother Rory headed home to function as chieftain of Tyrconnell, and O’Neill returned to Ulster to make the best defense possible.

As the Four Masters wrote in their Irish Annals in 1632,

“Intense and countless was the loss in that place, although the number slain was trifling; for the prowess and valour, prosperity and affluence, nobleness and chivalry, dignity and renown, hospitality and generosity, bravery and protection, devotion and pure religion, of the island, were lost in this engagement.”

How different would have been the history of Ireland had O’Neill won the battle of tactics the night before the battle?

Tragically, the future now belonged to the barbaric English, Protestant Kingdom of Ireland.