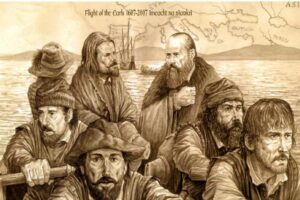 The Flight of the Earls – Rory O’Donnell left and Hugh O’Neill right 1607, by Sean O Brogain

As described in the historical background section of The Irish Clans: Book Three: Rising, Red Hugh and Rory O’Donnell survived the battle of Kinsale. They held council with The O’Neill the next evening where Red Hugh decided to sail immediately for Spain in an attempt to recruit more Spanish forces from Philip III. His brother Rory led the remnants of their army back to northern Tyrconnell (Donegal) while The O’Neill returned to Tyrone.

The Spanish, who had lost many men in the siege, gave up Kinsale to Mountjoy “on Terms.” They were allowed to sail back to Spain with their colors flying on the basis that they would surrender their other positions at Dunboy, Baltimore and Castlehaven. Ironically, another Spanish force was within a few days of arriving in Ireland, too late to alter the fateful course of events. They turned back. Aguila, who had distinguished himself in many battles throughout the Spanish world, was severely censured for dereliction of duty and died in August 1602 before a war council could sit against him.

One of the English generals and President of Munster in the south, Sir George Carew, sent James Blake, a spy, after Red Hugh to poison him. Within the year the Clan Chieftain was dead in Spain and there was no more assistance forthcoming from that country.

At the Treaty of Mellifont in March 1603, The O’Neill was pardoned and submitted to the crown.

The O’Neills and O’Donnells retained their lands and titles, although their power was greatly diminished. When King James VI (Scotland) and I (England) took the English throne in 1603 upon Queen Bess’s death, he pardoned the Irish lords and their rebel forces. Now governed by British and not Brehon Law, both clans lost substantial lands and influence.

Rory O’Donnell was granted the Earldom of Tyrconnell in September 1603 much to the dismay of Cousin Niall O’Donnell who had worked with the British, Docwra to overthrow Red Hugh so that he could become Earl.

In 1605 the New Lord Deputy of Ireland, Sir Arthur Chichester, accelerated the seizing of Clan lands. That year, Catholic Englishmen attempted to assassinate King James in the House of Lords. This gunpowder plot was thwarted, but it left the Catholics in Ireland more vulnerable to retaliation both militarily and politically.

By 1607 both The O’Donnell and The O’Neill feared being arrested and imprisoned, or worse. This is because King James issued a proclamation declaring both Earls as treasonous and setting the stage for commandeering their lands and titles.

The two northern Earls set sail from Rathmullan, county Donegal in the north for Normandy with their families that year. Earl O’Neill trailed a gold cross, reportedly containing a relic of the True Cross behind the ship to ward off storms. Ninety family members travelled with them including Niall O’Donnell’s wife.

The Earls initially went to Spanish Flanders in a vain attempt to gain Spanish support for rebellion in Ireland. No such support was provided. Then they went to Rome. Rory met with the Pope. Then he died mysteriously in the Roman port of Ostia.

Niall O’Donnell was eventually incarcerated after an abortive uprising in Derry (now Londonderry) was quelled by the English in 1608, and he and his son died in prison.

With that, the English had taken over Ireland from the native Irish, and they planted their own nobility into the castles and lands of the Northern and Southern Clans. The permanent exile of these Earls was a watershed event in Irish history, symbolizing the end of the old Gaelic order.