The Great Hunger – Irish to the Core Weekly Blog 12 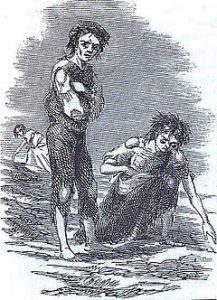 The Great Famine at Skibbereen by James Mahony, The Illustrated London News, 1847

Having presented some background information regarding organization and financing of the Irish revolution by Irish Americans in my previous blogs, I turn back the clock to one of a major forcing functions of British occupation hatred and Irish immigration to America, The Great Hunger.

After conquering the Irish Clans at the Battle of Kinsale in 1602 and the flight of the Irish Earls to continental Europe in 1607, the British confiscated Irish lands and turned its previous owners into serfs with few rights. Their Catholic religion was banned.

Over the following two and a half centuries, mostly-absent English landlords managed with an iron hand, squeezing as much produce,  livestock products and rent money as possible out of their tenant farmers. To some, the Irish were considered vermin to be exterminated when they caused trouble.

The Irish Lumper potato was introduced to Ireland by the British in the 1700s and it became the staple food of the Irish peasants particularly in the winter.

In the first forty years of the 1800s, various British governments grappled with the growing destitution of the Irish farmers, without success since many parliamentarians were absentee landlords who controlled the purse-strings.

The results of over a hundred government studies during this period found without exception that “Ireland was on the verge of starvation, her population was rapidly increasing, three-quarters of her laborers were unemployed, housing conditions were appalling and the standard of living was unbelievably low”.

In 1844, Benjamin Disraeli, who would much later become British Prime Minister, wrote “Ireland has a starving population, an absentee aristocracy, an alien established Protestant church, and in addition, the weakest executive in the world.”

Clearly the stage was set for disaster.

In 1842 a potato blight, P. Infestans was first found in Toluca Mexico. It spread within North America in 1843-44 and was likely carried on potatoes used to feed passengers on clipper ships sailing from America to Europe including Ireland.

The potato crops started to fail throughout Europe in 1845. In Ireland, half of the potato crop was destroyed. In 1846, the loss was three-quarters. Since three of the eight million people in Ireland, particularly in the south and south-west were totally dependent on potatoes for food, famine and starvation were inevitable.

Initially Irish leaders in Dublin were successful in having the British Parliament repeal the “Corn Laws” that had caused food such as corn and grains to be unaffordable. Later, work programs and soup kitchens were established in some areas but they were woefully inadequate to solve the problem.

While other affected countries imposed strict export laws to keep their foodstuffs at home for their populations, unfortunately, the Irish landlords continued to export livestock, butter, peas, beans, fish, rabbits, honey, sheep – all the healthy farm products, primarily back to Great Britain. In most cases, this left the Irish tenants with only the rotten, blackened potatoes.

Hundreds of thousands of tenant farmers failed to pay their rent when their crops died so they were evicted. The exact number of Irishmen, women and children who died of related disease or starvation over the period 1846-51 is not known but estimates of over a million are prevalent of which three quarters died from malnutrition-based diseases like diphtheria.

Additionally, over a million Irish people, those with any influence or adequate savings emigrated primarily to America on ships named rightly as “coffin” ships. This will be the subject of my next blog.

John Mitchel, an Irish nationalist and member of the Young Irelanders who rebelled in 1848 as previously discussed, was deported to penal servitude in 1848. He earned notoriety in the United States for his stand oddly supporting slavery while writing “British actions during the famine and their treatment of the Irish was a deliberate effort to murder the Irish. The Almighty indeed, sent the potato blight, but the English created the famine”.

The Lord-Lieutenant of Ireland, Lord Clarendon, wrote in a letter to the Prime Minister in 1849, urging the government for more help, saying “I don’t think there is another legislature in Europe that would disregard such suffering as now exists in the west of Ireland, or coldly persist in a policy of extermination”.

No wonder Irish nationalism was revitalized in the heart of O’Donovan Rossa and other Irish patriots!