The Irish Brigade – Irish to the Core Weekly Blog 15 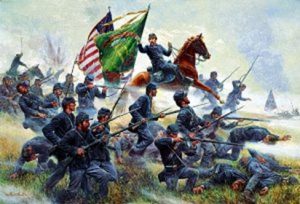 The Irish Brigade, Raise the Colors and Follow Me, Painting by Mort Kunstler

Last week I wrote about how the Catholic Irish refugee immigrants were mistreated in the USA during the 1840 – 1850s. Despite their challenges, and coming from starvation and death back in Ireland, they understood the value of their new-found freedom.

When the Civil War broke out in their new homeland they wanted to fight. Of the estimated 160,000 out of an American Irish population of 1.5 million who fought, only 20,000 joined the confederate army. It is said that they were concerned that whatever tenuous foothold they had achieved in America would be threatened if slaves were freed to work for themselves.

The majority of those who fought did so for the Union Army, recognizing that slavery, like their own harsh servitude in Ireland had to be abolished. Perhaps it was a release of their pent-up anger at an overwhelming enemy they could not fight at home that had killed so many of their relatives and countrymen, women, and children.

Whatever the reasons, the Irish were some of the fiercest combatants in that terrible, divisive civil war. As a result they took some of the highest death losses in this cause for freedom. Their war cry Faugh a Ballaugh meaning ‘Clear the Way’ became famous on the battlefield.

The Irish Brigade was authorized in September 1861 by the Secretary of War Simon Cameron, originally consisting of the 63rd, 69th and 88th New York infantry. They were joined by the 29th Massachusetts Yankee regiment who weren’t particularly bonded to the Irish ‘Fenians’ prior to the Battle of Antietam, perhaps their most formidable defense of the Union.

Antietam was a pivotal battle waged on September 17, 1862 near Sharpsburg, Maryland. This was the bloodiest day in American history where the Union forces stopped General Lee’s march in Federalist territory toward Washington DC. It occurred just after the Union’s defeat at the Second Bull Run battle and was the last act of the confederate invasion of the north.

That day the Irish Brigade of Union soldiers, commanded by Brig. General Thomas Francis Meagher, led the charge that stopped the Confederate forces at great terrible loss of life to their ranks. This was an example of trench warfare fifty-two years before the onset of the war to end all wars in Europe. Only, in this case, the confederate soldiers were protected in a ditch and the Irish brigade was in the open, having to dismantle a fence to get to their adversary.

After Antietam, the 29th was replaced by the predominantly Irish immigrant 28th Massachusetts regiment.

It would be fifty-four years after Antietam before members of the Irish Clan na Gael in the United States could muster the resources and will to organize a pivotal rebellion against oppression in their beloved Ireland at the 1916 Easter Rising. Then, they solicited the help of the Germans to overthrow the British tyrant in Ireland, including the development of another Irish Brigade in Germany with an entirely different character.

For more detailed reports of the over 30 battles that the Irish Brigade fought in the American Civil War where they distinguished themselves, go to https://irishvolunteers.tripod.com.