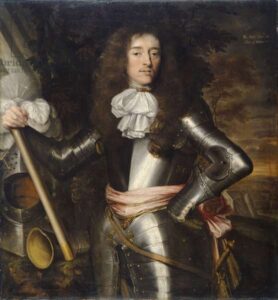 Last week I discussed the early years of the Irish Confederate Wars when the confederate army took control of all but the British strongholds of Dublin, Cork City and parts of Ulster. They seemed to have the momentum. Why then would they agree to a truce or “Cessation of Arms” with King Charles I’s Royalist Army on September 15, 1643?

Despite Charles not supporting their rebellion, they still believed in him and his Catholic wife. They realized that this agreement would result in Charles returning many of his troops to fight his Civil War that was erupting with Parliamentarian and Scottish Covenanters forces in England. They did not realize the extent of the parliamentarian power in England.

This was a critical strategic error.

The truce allowed the confederates to retain the territories that they had captured albeit temporarily, and time to build up stronger armies, but they were prohibited by the truce from recapturing more of Ireland.

This delaying tactic by the English was very similar to the methods used during the revolution in the twentieth century. The abortive negotiations resulting from the Cessation of Arms went on for three crucial years.

The period 1643 to 1646 was dominated by skirmishes, with all sides attempting to starve their enemies by the destruction of crops and supplies, causing great loss of life, particularly among civilians. The bitterness it engendered is illustrated by a Parliamentary Ordinance of October 1644, which forbade ‘giving of quarter to any Irishman or Papist born in Ireland who shall be taken in Hostility against the Parliament either upon the Sea or in England and Wales.’

An offensive against Ulster in 1644 failed to make significant progress, while defeat at Marston Moor in July made it increasingly clear the English Royalists were losing the war. Two weeks later, the Earl of Inchiquin defected to Parliament, giving them control of the ports of Cork, Kinsale and Youghal.

The confederates began to see that they could not count on the King who was losing control in England.

In late 1644, the Confederates took Bandon but Inchiquin retained control of Cork; Confederate Preston captured Duncannon in January 1645, then besieged Youghal but lack of supplies forced him to abandon the siege in March 1645.

The stalemate, however, broke in 1646. During the summer after the end of the First English Civil War with the Parliamentarians victorious, the Confederate military tried to make as many gains in Ireland as they could before the expected invasion by the forces of the English Parliament.

During this critical period there was a fierce rivalry between the Parliamentarian Boyle family centered at Linsmore Castle near Youghal east of Cork City and the Confederate McCarthy Clan, both the MacCarthaigh Reagh branch centered at Kilbrittain Castle west of Cork City and the McCarthy Mor branch centered at Blarney Castle northwest of Cork City. Richard Boyle, who had fought for the English during the nine years war, had become the 1st Earl of Cork and Treasurer of Ireland. His son, Lord Kilameaky attacked and captured Kilbrittain Castle in 1642. In retaliation, McCarthy Mor lay siege to Lismore Castle in 1643 but was beaten back. As we will see in our next weekly blog, a second Boyle son, Lord Broghill successfully lay siege to Blarney Castle in 1647.

These Boyle/McCarthy battles have a profound impact on my “The Irish Clans” mystery and story.